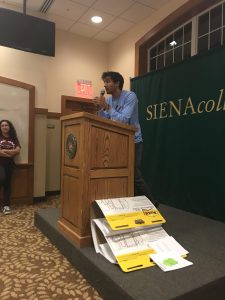 The following blog was written by Owais Mahmood, a sophomore Bonner Leader who is partnered with Dobbins Hill and was selected to be the sophomore representative at the national Bonner Congress.

I would have imagined the experienced that I had during Bonner Congress! It was full of excitement, perspective and loads of Bonner Love! I was so grateful to represent UNC Chapel Hill at the 2017 Bonner Congress.

First, I have to mention, I thought I was going to NYC, but it was actually the capital of New York State, Albany. Upon landing, Tayia and I were so excited just for everything; we got picked up by our ride and headed off to Sienna College. Now, Sienna College is not really a big school as there are approximately only 3,000-4,000 undergrads there which is significantly less than UNC. The very interesting thing I heard quickly was Bonner is really big and well-known within the college, something that motivated me to do the same for UNC.

During the first day, I was introduced to Bobby Hackett, the director of the Bonner Program and man he was a pleasure to get to know. He was so enthusiastic and helpful with our Big Idea, helping us with resources as well as introducing us to many other Bonners who had similar intentions. Unfortunately, my day took a very different turn as I had to go to a market and get a tooth brush and tooth paste. I took the bus with on the Bonners I had met, Jared, to tour downtown Albany and finding that absolutely no store was open. It turns out that the upstate New York shuts down fairly early compared to Downstate. I was able to find an Uber to the market and back to Sienna College.

The days after were full of excitement! We went through so many workshops and hypothetical games that helped us understand more about ourselves and our potentials as well as the world around us. I remember one of the games we played was “The Game of Life”. All of the players were given a name tag and the name tag represented the color, gender, and socioeconomic status tha 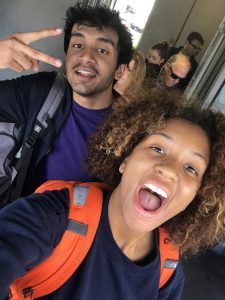 t each of has had. There were hypothetical things that happened to us and it helped me understand and gave me insight what some groups of people go through. I also was persuaded to give a “Bonner Story” which I twisted and chose to talk about something else for that 5 minutes. I ended up speaking about the experience I had in Jordan with the Syrian and Palestinian refugees as they were really eye-opening over the summer. I have to say though, I was soooo nervous for that, but Bobby told me right after that I did well. I mean I was standing in front of the whole Bonner Congress which was like 500 people or something, but what was important to me was getting that message out, so I proceeded because it was something that was important to me.

The last day was full of laughter and sadness. Leaving the event and all of the Bonners was a very sad experience, but this experience brought me so much insight from the Bonners all over the U.S. I am grateful to have gotten to this event and represented my school as I will surely unveil the ideas and experiences that I had there.